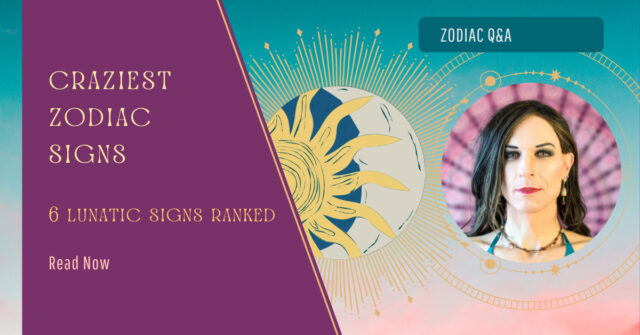 Crazy is quite a heavy word and may even sound offensive; therefore, it was tough to write this article. The problem is when people hear the word “crazy,” they immediately assume “mental breakdown” or “violent.” However, crazy is a term associated with some silly, strange, and outright weird. So when we talk about the craziest zodiac signs, we have to talk about the behavior and tendencies of the people associated with the sign.

Gemini is the top craziest zodiac sign, followed by Aries, Aquarius, Sagittarius, and Libra. We should not be surprised to see Gemini and aries holding the top position as they are the kings when it comes to seeking attention and throwing a tantrum. Meanwhile, signs like Sagittarius and Aquarius love their solitude and get super defensive of their personal space. On the other hand, Libras are what they are- sweet and thoughtful unless provoked.

Gemini is undoubtedly snatching the top position for the craziest zodiac sign. Remind you, Geminis are generally funny and can show you a good sign, but can also be the most unpredictable person you will even meet. Their mood fluctuates more than Christian Bale’s weight in movies.

They can go from 0 to 100 in a heartbeat, making people wonder what’s happening. Due to their duality and unpredictability, people often call them two-faced and are most hated among the zodiacs. The sun sign is driven by curiosity and expressiveness. They are also quite adaptable and flexible in different environments. Hence, they don’t struggle to make friends anywhere.

However, they always like to talk and speak what is on their mind without considering others’ opinions. On top of that, they often chase something new and exciting. As a reason, they have a hard time holding on to a decision and even relationships.

Geminis have a hate/love relationship with conflicts, which further confirms their craziness. For instance, they hate confrontation but cannot stop talking about it to others. If they do not like anything about someone, they would love to gossip about it to others rather than confront the person. This adds even more fuel to the fire and ruffles some feathers in the long run.

Also considered the meanest zodiac sign, Aries also make it on the list of crazy. Inherently adamant and confrontational, Aries loves to find a new ways to get risky. They love to take on things that scare and challenge them and make their adrenaline pumping through the roof. Whether it’s an argument over a movie or politics, when your opponent is an Aries, be prepared to face some temper tantrum.

People close to Aries called them ticking time bombs ready to explode at any moment. While they tend to get angry very quickly, they also have a softer side that only a few close ones are lucky enough to witness.

People born under this zodiac sign are spontaneous, passionate, and intelligent. However, they have difficulty handling a high quantity of knowledge colliding inside their brains. Due to their self-righteous nature, they don’t like to listen to people telling them wrong. Consequently, to prove their point, they tend to go into crazy fights, and if you are around them, it’s time for you to run.

Aquarians are born rule-breakers to the point of breaking their own rules if they feel like it. They are among the nicest zodiac signs out there, but they have to carry some craziness that falls mainly on the fun side. They are the least mean and are great listeners, which is why people love them.

However, they love to stay in the present and think less about the future. They avoid when people ask about their past or future, which is why they often pay significant attention to other people. If you want to please an Aquarian, they try to stay present, and they will roll with anything that comes their way.

Coming to the crazy side, Aquarians are proud of being crazy as they live for fun and nothing else. They are those people who would always pick “dare” and go through it without giving it a second thought. If they feel challenged, they will even get crazier.

Needless to say, you will never get bored in their company and will always cherish their great sense of humor. Since they always find time to listen to your problems, they also expect you to spend time with them. However, they don’t need you as a shoulder to cry on, but someone who accompanies them with their crazy adventure.

You must find it surprising to see the nicest zodiac sign on the craziest list, but despite being fun and friendly, Sagittarius can act crazy sometimes. To clarify, Sagittarians are super fun people who always want people around them happy and cheerful. Hence, they can take extreme measures to make those people laugh.

They are explorers and knowledge-seeker by nature. Therefore, they make great travel companions who will love to show a good time. They are crazy in a good way as they are eager for action and adventure. While generally, they are calm and composed, they have a hidden “wild” button in them that just needs a push to unload their craziness.

However, what fuels their craziness is their passion for seeking knowledge and information. They are super possessive when finding something and can become impatient, resulting in violent outbursts.

Due to their self-reflecting capabilities, they are aware that they are impulsive and unpredictable. Therefore, they prefer to seek their own knowledge and abstain from seeking a helping hand. While they try their best to stay present and make you laugh, they are also very determinant in their decisions. For instance, if they want out of the party, don’t force them to stay. They would respect you more if you just let them go on their way and thank them for their time.

If you summarize a Pisces in one word, it would be “noncompetitive.” They are super chill and content in their life and expect people to honor that. Their motto is to “don’t judge me, and I won’t judge you.” Since they don’t like conforming to the generally accepted norms, people often consider them crazy. However, in my opinion, they are someone who prefers living their life on their own terms.

Pisces are pretty creative and artsy, but they love to see art from their eyes and not from the creator. This makes them exciting yet very unpredictable and distant. They are too preoccupied with their own head and forget about the rest of the world.

While they are always ready to lend you an ear, they built a wall around themselves rather than giving others a chance to help when it comes to their turn. Without realizing their defensive nature is what makes them distant from people, they assume that they are alone and it’s them against the world.

Assuming nobody understands their feeling and opinion, they often become defensive about the little things.

Well, Libras are crazy but one of the good ones. They are ruled by intelligence and known as critical thinkers. While they are the calmest, sensible and gentler people you will ever find, don’t bother going into an argument with them. Their critical thinking ability empowers them to fight a battle with knowledge and logic.

Libras are people pleasers, and they are proud of that, but gob forbids if you ever poke them the way. They hate it when people take their silence into weakness and try to push them around. Although they will do everything within their power to diffuse the tension, if they seem like they are failing, they will switch on the “clever” side of their brain.

They would throw logic after logic in an argument unless they shamed the person initiating the discussion. Logic, calmness, and presence of mind are powerful tools to win an argument, and Libras know how to use them. Despite being agitated by the other party, they always succeed in keeping their composure and fighting aggressiveness with pacifism.

How to Deal with a Conservative Boyfriend?

Why Does Your Father Hate you? 5 Reasons and Action Points

How to help with swollen eyelids after eyelash extensions?

How to clean urine from car seat? Tips and Hacks