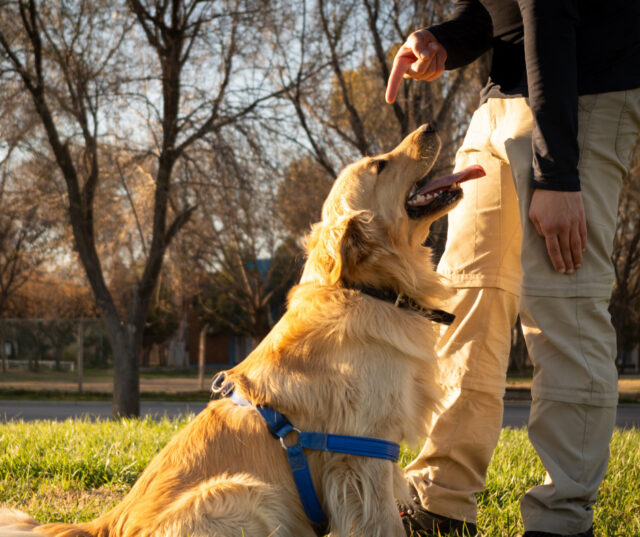 How to train your Golden Retriever puppy to bark at strangers?

As the very name suggests, Goldens Retrievers are medium sized gun-dogs bred in the 19th century to retrieve game birds like ducks and fowls during hunting and shooting parties. Exceptionally intelligent dogs ranked fourth in the list of 79 intelligent dogs by neuropsychologist Stanley Coren, they can be suited to live in any environment be it urban apartments or country farms or even cold moor lands.

That said Goldens have a reputation of being great family dogs but poor watch dogs because of their extremely friendly nature and their forever need to please and befriend humans. Being gentle by way of their genes and aristocratic lineage, it can be safely assumed that a bark of a golden is more in the lines of a ‘how do you do’ and ‘lets play’ woof and rarely a ‘beware of me stranger’ bark.

But by training it from an early age in various ways of commands, signs and treats we can train our golden to bark at strangers if not more( they are not meant to be made watchdogs. Trying to make them one will lead to unnecessary investment of time and energy on either side with not so promising results.

Let’s know some ways in which we can train our golden to bark:

Goldens if anything are very good at catching commands. They have an inherent ability of understanding the human’s state of mind through his body language and reciprocating. Studies have shown that Goldens are very good at understanding facial expressions and reacting likewise. Commanding a golden to bark at strangers from a young age is perfectly doable as long as it is taught the proper commands. Some owners and dog trainers have the trick of teaching it commands by way of touch.

One sided stroking of its neck mane in normal conditions. Reverse stroking of it’s neck mane when they want it to be on its guard or be aggressive or in simple terms refrain from being their usual friendly self to the person in question. It is also a simple secret to teach commands in your native language so only the trainer knows the command word instead of others. It is a simple and effective method of teaching a golden to bark and the results have always been effective to a great deal.

Every animal in training appreciates treats be it orcas, elephants or horses. And canines are no exception. Treats are a way of conveying the message that they are going in the right way or putting it simply doing a good job. And treats come especially handy in training Goldens who love treats. Be it chew sticks or homemade treats or natural treats like a slice of apple or a corn on cob, making your golden realize that it will be rewarded with its favorite treat after it has followed your instruction of training or barking will make it more zealous in following instructions. And why not. After all its precious treats are at stake. The only 2 things to be taking into consideration while giving the treats are:

This last way has had a lot of controversies attached to it partly  because of its method of tying the golden on a leash deemed unethical and cruel by many animal rights activists and partly because of some  dog owners not adhering to the rules and ethics of tethering of canines including time limits and making it an extremely uncomfortable and cruel experience for the canine.

It is true that by tethering a golden, we not only teach it to stay in one place but also stay in one particular place where it can  warn us vocally of any stranger or outside person entering the house.By tethering a golden puppy early in age, we can effectively teach it potty training as well as staying in one place to see who is entering the house and subsequently bark at the intruder. But there are some guidelines attached to this particular practice.

By properly following these guidelines while tethering we make it easy for the golden to follow the command of barking at any person we train it  to bark at while not making it uncomfortable or a painful experience for it.

Now let us answer some commonly asked questions about teaching a golden retriever puppy to bark at strangers.

How do I get my puppy to bark at strangers?

By training it with the correct commands. Studies have shown that Goldens are exceptionally intelligent dogs who can learn more than 50 types of commands provided they are properly given. By training them with the proper commands with rewards or treats on their execution of the commands, a puppy can definitely be trained to bark at strangers.

At what age do puppies start barking at strangers?

It is actually a fact that it can be identified which puppy will be a future barker before they have opened their eyes judging by the intensity of their squeals among their litter. And the pupper with the most high pitched squeals will be a great barker. But puppies usually grow out of their squeals into bark mode by the age of 5-6 months. By 5-6 months a puppy trained to bark will start barking at people irrespective of family or strangers. Now identifying the stranger from the family and barking at them might take 2-3 more months.

How do I get my golden retriever to bark?

By training it with the proper commands. Proper training can ensure that a golden barks at the people it’s owner wants it to bark at. Reward it with its favourite treat after it has obeyed your command to make it understand that it’s efforts are appreciated. That will encourage it to work harder at listening to you.

Are Golden Retrievers friendly with strangers?

Goldens or for that matter are what they are trained to be. According to Mr Arthur Conan Doyle ‘A dog reflects the family life. Whoever saw a frisky dog in a gloomy family or a sad dog in a happy one? Snarling people have snarling dogs, dangerous people have dangerous ones.’ Likewise a golden retriever from a friendly human will be friendly with strangers and vice versa.

So basically our temperament is reflected in our Goldens. They not only mimic our facial expressions but also our body language. And it is the harsh truth that Goldens are bad at being guard dogs. But properly trained they can be Barkers and make sure that their human knows that a stranger has approached their gate. It is up to us to make the most of their learning ability and teach them proper commands following which we can definitely train them to be good Barkers as well as good guard dogs as well.

Why Do Dogs Eat Poop? What to do?

How to Remove Water out of a Charging Port? Liquid Detecting Error (iPhone)

Why are gas prices rising?