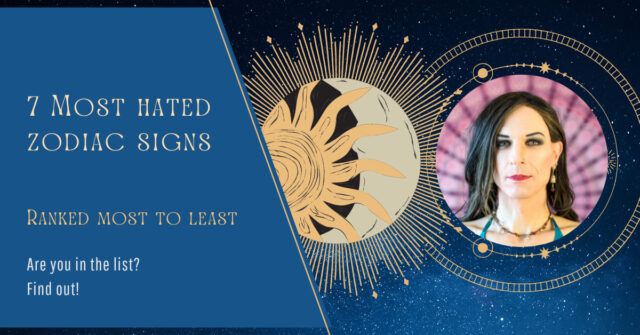 Every zodiac signs have both good and bad sides. Although hate is a strong word, it’s not something should be taken seriously in extremities. Keep in mind that our opinion does not represent the opinion of others, and it may differ upon the personal experience of an individual. Our intention is not to hurt anyone but to engage in a healthy discussion. Let’s come to the point!

Each sign comes with some annoying traits since we are not cut from the same cloth. However, some zodiacs carry these toxic traits more than others. Among the twelve, the top seven most hated zodiac signs include Scorpio, Gemini, Virgo, Aquarius, Leo, Taurus, and cancer.

The Top 7 Most Hated Zodiac Signs

The fuming anger issues with intense stubbornness can make people hate Scorpios. Well, not all Scorpios are hotheads who go on a rampage on every minor conflict, and however, they mostly fail to keep their anger under control. Some people even compare them with explosives that can burst at a tiny spark.

If you are a calm person looking for stable-minded individuals, choosing a Scorpio should remain your last option. It’s tough to determine their mood, let alone thoughts. Highly unpredictable and moody, their mysteriousness surely can get on people’s nerves.

Scorpios can harbor extreme hatred for a person who did them wrong, and they are not someone who forgives easily. Once you get on their hate list, you can expect to stay there for a long time unless you go on extreme depth to regain their trust.

Which Zodiac Sign is the Meanest? Nicest to Meanest Ranked

What can really end the deal is their possessiveness and stubbornness. A small discussion may end in an argument as it’s pretty hard to convince them or change their minds. It almost feels like they do not care about your opinion at all. As a friend or partner, they can be highly possessive toward you, leading to unhealthy outcomes.

Sure, scorpions have anger management issues, mysterious and stubborn, but there is less likely to have some personal agenda. They are fixed water signs similar to a block of ice that requires trust and honesty to melt. Scorpios are intuitive, and they know whether you actually are interested in them or doing small talk, which explains their mysterious appeal and moodiness.

So if you are recently attracted to a person who is Scorpio, you can look for help from this book. Personally speaking, I definitely got a lot of tips to deal with my friends and family, no matter their zodiac sign.

Geminis are often referred to as two-faced individuals. When we come across a Gemini, people often wonder if it is a real or a pretense. Even though that is not necessarily true, this troubling perspective for Gemini has been etched in the mind of people for centuries.

The hate actually comes from the mythology of famous identical twin brothers, Castor and Pollux. However, castor was the mortal son of King Tynfarus, while Pollux was the immortal son of Zeus. Castor got killed in the Trojan War, which made Pollux filled with grief as he could not save him. Pollux begged Zeus to make him immortal and allow them to stay in heaven. Zeus allowed them to split their time to take turns living in the heavens and the underworld.

This makes people scared of Gemini, considering they live in different realms. It was unconventional for people to trust a person who has a relationship with sinners from the underworld and the saints from the heavens. That’s why they are often considered manipulative, indecisive, and inconsistent.

However, what may come across as odd and untrustworthy for some, Gemini can be a gift as you are two-person people all rolled up in one. This gift allows Geminis to consider and understand different perspectives, which usually helps them come to a balanced solution about issues.

Virgos are a synonym of “worry,” making them quite annoying sometimes. They often blame themselves and think they could have changed the situation if they had put more effort, and there is nothing in this world that does not worry them.

As ruled by mercury, Virgos may come off overtly critical of everything, including themselves. While this attitude helps in their education and career, it often does not land perfectly when it comes to socializing.

Their pondering and incredibly critical attitude often make them take things too seriously that it becomes a hurdle from daily enjoyment and living their life to the fullest. As of now, you can easily infer that Virgos are thought to please due to their judgmental nature. They want everything to be its most refined and down to the very last details, meaning go for high standards, which, of course, make them a challenge to be with.

Every zodiac signs have some negativity and positivity, and Virgos may fall under the top 7 list that doesn’t make them excessively bad from the rest. If we rule out their incessant criticism, Virgos have a survivalist mentality. Virgos often keep their feelings to themselves. For example, they don’t want to bother or upset others by bringing their personal life into other people’s businesses. Even though they pay attention to the tiniest thing, that is not always bad.

People with the Aquarius zodiac sign often become too self-righteous and condescending to the point that it can drive you off. They usually throw logic at everything, even when there is no need for it.

For instance, if you complain to an Aquarius about your work environment, they will end up giving you a big lecture about how perseverance and determination can solve everything. While some knowledge may serve a purpose, it means nothing when all you need is emotional support.

Before you even begin to justify your words, you would have already received an early of unnecessary advice. Aquarius does not grasp that sometimes things can go wrong despite hard work and contingency plans. They are too adamant to accept that we all need help from others at times.

Speaking out of terms or giving random pearls of wisdom will not solve a person or make their life better. Meanwhile, they think they are helping out a person in real. Sometimes, we need to look at the gravity of the situation and consider the disposition of a person before opening our mouths. Aquarius is too stubborn to accept this truth.

These ridiculous idealist views of Aquarius can self-sabotage their chances of earning a friendship. Besides, it makes them appear apathetic, stubborn, and extremist.

Aquarius is ruled by planet Saturn and the element of air, which makes them intelligent and energetic. Some people do adore them for their impulsiveness and candor, but most of the time, it’s simply annoying and heartless.

Leos are self-proclaimed “king of the jungle” who often wants to control the situation, making them one of the hated zodiacs among people. They are obsessed with everyone’s attention, and never is enough for them. Their struggle for attention often makes them unsympathetic and unaware of others.

They live in a candy world where they consider themselves the main protagonist and think the world revolves around them. Needless to say, they are self-centered and egoistic. Their chase for personal gain and valor often make them neglect the needs of others, making them a terrible team player.

Of course, nobody wants to be around a person with an extreme superiority complex who is so full of themselves and self-entitled to see their own flaws.

Changing Leo’s mind is next to impossible. Once they set their opinion, they won’t budge from their place.

Ruled by the sun, Leo often shines bright, which is the source of their self-assurance, natural leadership, and drive. Aside from the negatives, Leos are pretty passionate, and sometimes they won’t hesitate to go that extra mile even though their motive is to please you and make a good image in your eyes.

Taurus wins the trophy of “stubbornness” among all zodiac signs. Although they are strong-willed, they never come off as aggressive. However, they are incredibly possessive of material objects, which is the primary reason why people hate this zodiac sign. One other annoying thing is that they want things to be the way they are. They are so obsessed with materials that they won’t hesitate being rude and throw judgment at you, especially if you lose their belongings, spend more money, or break something.

They hate to admit their fault and will argue with you on baseless points as long as the other person gives up. Well, if you want a Taurus to admit a mistake, then don’t wait for it anytime soon.

All things aside, Taurus can be loyal and make a good friend or partner.

Cancer is an overly emotional zodiac sign ruled by the moon, which means their attitude changes as frequently as tides. They are full of insecurities and tend to get moody, pessimistic, and vindictive at the flip of a switch.

One moment you see them as a jolly good fellow; the next moment, they become an extreme heap of mess. The annoying part is that they never give you a reason behind their inconsistent behavior, making it hard to be around Cancers.

One thing they dislike the most is negative criticism. A single negative comment is enough to ruin their mood and self-esteem. The worst and scary part is they will never forget it and often end up being vindictive. They are not among those who forgive and forget- they remember everything. They are revengeful, but not in an aggressive way. They know how to manipulate others to get what they want.

Despite everything, cancers are sympathetic and sensitive. They deeply love their close ones and empathize with others’ pain and suffering. To understand more about them and their thought process, you can also go through this book which beautifully describes the intricate beauty about each zodiac sign.

How to clean urine from car seat? Tips and Hacks