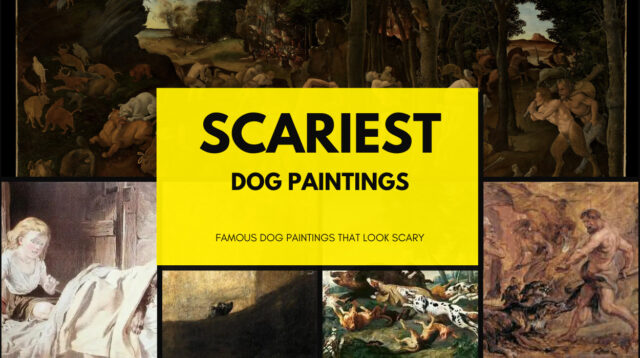 A universal fact- everyone loves dogs. They’re cute, they’re furry, they’re fun, and they’re loyal. But, more than that, they are integral members of society. They work in the police force; they herd sheep, protect our homes, and even assist people with disabilities, making them more than worthy of the title of “man’s best friend.”

However, most people forget that our lovable companions are descended from the wild and savage animal, the wolf. With their sharp claws and crushing fangs, as well as their wily cunningness and pack hunting abilities, these formidable foes are the stuff of nightmares.

In art and popular culture, dogs have often been depicted as terrifying frightening creatures akin to those hell-like demons. The following article looks at these more wicked attributes and some of the most well-known paintings depicting them.

The Dog by Francisco Goya.

Francisco Goya is revered as one of the modern era’s most important and influential painters. His anti-war paintings and inventive style inspired a whole generation of artistic movements and artists. His artwork of “The Dog” is one of the most famous dog paintings out there.

Goya became known for his dark and scary paintings later in his career. One such unsettling painting is that of “The Dog.” The artwork features a lone dog, whose head is only visible as it looks to be swimming and struggling to keep its head above water.

This painting involving a canine is laced with many more profound meanings. For starters, the dog seems utterly lost in a dark space and can be said to represent how most people feel at one time or another. This, along with its other interpretations, make it easy to see why it is one of the most famous pieces of art involving a dog.

Let’s start with the wolf, the most terrifyingly scary hound. Never mind just being the terrifying dog; the wolf is one of the scariest animals on the entire planet, period. They hunt in packs and stalk their prey silently right up until the moment when they pounce.

Until recently, they were one of the most dangerous predators for human society and the biggest threat someone could encounter alone in the wilderness. For this reason, wolves have been prominent in mythological stories and folk tales. One such tale of the conniving wolf is the story of a little red riding hood

In Alex Davis Cooper’s gripping illustration from the fairytale, the wolf hides under the covers of the red riding hood’s grandmother’s bed, pretending to be the sweet old lady. Innocent and naïve, the young girl is unaware that the calculating wolf awaits under the sheets and that she is about to be its next meal. Truly frightening indeed.

When talking about scary dogs, there is no better candidate than the demonic hound from Greek mythology known as the Cerberus. This terrifying hound of Hades is said to have three heads, fire in its eyes, snakes coming from its snout and mane, and feasted on raw human flesh.

In Greek culture, Cerberus is one of the devil’s pets and guards the underworld gates so that no wretched soul may escape. In the Greek myth of the twelve labor of Hercules, the Greek hero must undergo several seemingly impossible tasks as penance for the murders of his wife and sons.

The twelfth and last of the labourers Hercules is tasked with is to capture the Cerberus. In Flemish master Peter Paul Rubens’s tantalising painting, the struggle between man and ferocious beast is palpable as Hercules wraps a chain around one of the hound’s heads and attempts to subdue the demonic abomination.

French painter Alexandre Francois Desportes was one of the premier animal painters of his time and specialised in depicting dogs in paintings. The detail and finesse of his artwork resulted in some of the prettiest dog paintings you’ve ever seen.

He was even commissioned to paint dog portraits for King Louis XIV and King Louis XV of France. In many of his other artwork involving dogs, there is a strong emphasis on the more vicious and bestial side of our four-legged companions.

The dogs featured in “Hunting Dogs” all bare their teeth and are in full kill mode as they swarm and latch on to their prey. Hunting scenes such as this and the wild boar hunt is a common theme in historical dog paintings and is perhaps the best illustration of just how veracious and coldblooded dogs can be when provoked.

The hunting scene painting by Italian Renaissance artist Piero Di Cosimo aptly embodies all the scary traits of dogs mentioned in the other paintings on this list. Yet, Di Cosimo somehow captures all these traits in one fantastically eye-catching painting.

The painting is dark and foreboding, and there is an element of the demonic featured throughout, which is fairly common in a painting from this period. At first glance, you would even be forgiven for thinking that Di Cosimo is depicting hell here.

In the painting, a group of men, some of which have legs like goats, lending to the hell-like motif, are hunting and murdering all the animals in sight. The dogs also present ruthlessly bite at the necks and faces of the helpless animals. Despite all the violence, Di Piero still manages to make the painting one of the prettiest and most detailed famous dog paintings.

Over the years, there has been much famous art with dogs. Most of them focus on the lighter side of their nature. However, some dogs in paintings are depicted as scary and vicious, proving that there are two sides to everything in nature.