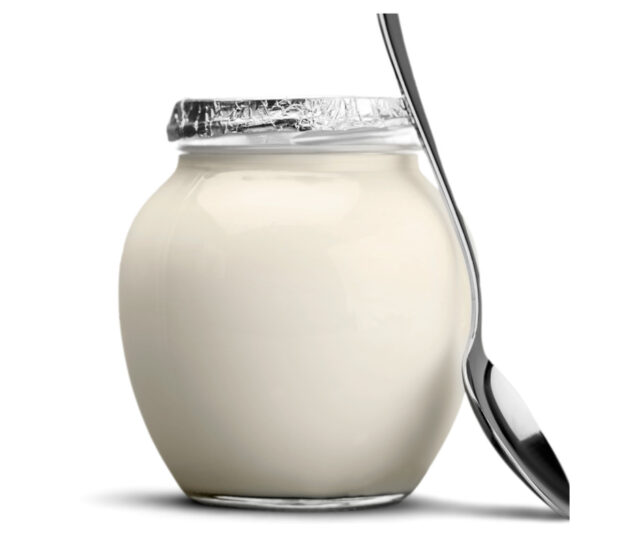 Can you freeze yogurt? – No, you shouldn’t

Technically, you can freeze yogrut, but you shouldn’t because freezing changes its taste, texture, consistency, and probiotic nature. Even with moderate freezing, yogrut loses its probiotic effect and lactose resistant power. What’s more? If not sealed properly, it can even bulge or explode.

Freezing yogrut causes a change to its-

Yogurts, be it American or Greek, have a smooth and creamy consistency. Freezing them, however, causes structural changes, which ruins its creamy consistency and gives it a grainy and coarse texture- appears odd when you look from outside. Additionally, it tastes different than before as you find the water and the gel as different layers after freezing for a while.

Yogurt is the result of treating milk with cultures of lactobacillus, streptococcus, and some strains of Bifidobacteria for fermentation. The first two bacterial strains are called ‘good bacteria’. Now, you must know that yogurt helps the body in a lot of ways- from improving gastrointestinal function, and strengthening our immunity, to strengthening our digestion. Even moderate freezing kills its two good bacterias- bifido and lactobacillus. This, in turn, causes the yogurt to lose its probiotic effect and makes it less efficient in fighting the bacterial problems of our body.

Both Plain and Greek yogurt taste slightly sour and we enhance their taste by adding sugar, salt, or honey to them depending on our requirements. However, freezing affects their texture, and make them acidic in nature. As a result, they turn grainy and taste much sourer than before.

The bacteria in yogurt contains an enzyme known as lactase which breaks down the lactose into digestable format in our intestines, thus is highly recommended by WHO for lactose-intolerant people. But freezing destroys its dormant bacteria, rendering them completely useless. As a result, its taste, texture and efficacy takes a backseat for lactose intolerant people.

Dangerous when frozen for long time

First of all, freezing yogurt for a short period makes the lactobacillus dormant or partially ineffective, making it a bad choice for lactose-intolerant people who depend on its probiotics.

Secondly, freezing after a particular period of time (approximately more than a month) makes it go bad. After which, if consumed, it can cause a lot of gastrointestinal problems like acidity and even vomiting and diarrhea. That is why, it’s better to consume the yogurt before its expiry date.

Thirdly, yogurt has a thick structure of water and gel consistency because of protein changes while heating the milk. When we freeze it, that structure collapses and ends up water collected at the top. After you defreeze it again, it attains a curdled appearance and tastes grainy. Now it barely tastes good.

Most dogs are lactose intolerant because they have advised yogurt, which contains lactase in this lactobacillus strain. Freezing yogurt causes damage to the lactobacillus, because of which its probiotic efficiency is hampered. Minus its probiotic effect, it is not very safe for dogs that depend on lactase for easy digestion and other health benefits.

Harmful, if not properly thawed after defrostation

The most common mistake that people do is while thawing the frozen yogurt. When kept at room temperature of 32-40 degrees Celsius, defrosted yogurt causes outside bacteria to form on its surface. So now we have harmful bacteria on yogurt that already has ineffective dormant good bacteria because of freezing it. In short, a recipe for disaster.

Contaminate, if not sealed properly

Yogurt, when not sealed properly before freezing, causes it to suffer freezer burn. Freezer burn is the process of damage caused to a food product because of improper ways of freezing. In the case of yogurt, freezer burn can evaporate the moisture of the yogurt and cause its shape to collapse, resulting in curdling.

One more disadvantage being improper sealing can contaminate the bacteria with the smells of other foods kept in the freezer. Causing it to smell rancid after being taken out. A smell that makes it impossible to be consumed anymore.

Risk of bulging or explosion

Some yogurts contain fruits which when not stored properly before storing, start fermenting. This causes gases, especially carbon dioxide, to build up and, when stored inside the cold freezer, start bloating and subsequently bursting.

Sale on yogurt tubs in supermarkets is a blessing to be considered with a pinch of salt. On the one hand, we get a carton full of yogurt at a good price, but on the other hand, we cannot finish it in one go and risk wasting it. Surely, freezing it will store it for some time. But should you freeze yogurt? You surely can. But you shouldn’t.