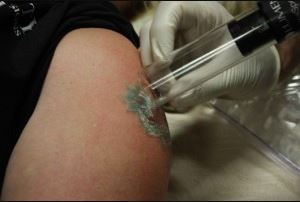 Getting a laser surgery to remove the tattoo (already unwanted) is the best and the most effective method. One example of laser tattoo remover is the Q-switch laser which has a fast pulsing laser that heats up the ink of the tattoo with little damage being done to the skin.

This works once the ink heats up by the laser, thus your body’s immune system steps in and removes the ink. Laser sessions for tattoo removal differ from one person to another, depending on the type of tattoo, size and the color. Here is how to specifically remove a tattoo with laser surgery.

Tips to Remove the Tattoo

Usually tattoo parlors are also offering tattoo removal services, but be careful because most of these tattoo parlors are not equipped to handle any medical issues that may arise. You need to schedule an appointment with your doctor. Take pictures before and after the procedure so that you can differentiate the outcome.

Tip #2: You must also prepare for the cost of tattoo removal

The standard cost for this kind of procedure can reach from $200 to $500 per session. The treatment may take up to 10 sessions with 6 to 8 weeks apart to remove a professionally made tattoo.

Tip #3: Make sure that your doctor is using the Q-Switched laser

This laser can trace the tattoo to heat up the ink. You may ask the doctor to give you a local anesthesia if you are having a large tattoo removal. If the tattoo you want to get rid of is located in an under clothing, wear loose shirts or clothing during your appointment for your laser removal.

Tip #4: Know what to expect after the treatment.

After treatment, tattoos often bleed, so ask your doctor to cover the affected area with gauze to avoid staining your clothes with blood. Clean and change gauze and apply antibacterial ointment to the treated area.

People with fair skin who have black or brown tattoos are more likely to achieve favorable results because the laser targets the ink and not the skin, which prevents it from creating a scar. You must also be prepared to pay the entire cost since most insurance companies do not cover the cost of tattoo removal procedure.

Tip #5: Accept that tattoo has always been a part of our culture

This form of art started way back hundreds of years ago to mark the nobility or status of a person. Today this is just a fashion that many of us embrace as a form of art done in the body. It has become a trend among young people, and many tattoo shops emerged like mushrooms.

It’s even considered as a booming business. But in the last decade tattoo removal has even become a bigger business, because it has been estimated that almost 50% of individuals who have tattoos later regret having it and wanted it removed.

At first tattoo removal was done in a very unsophisticated way, and often times left the person with a scar. But with the advance technology that we have today, tattoo removal is now done using laser surgery and became the gold standards for removal of tattoos. If you want your tattoos to be removed, consult a specialist about the problem and decide which method will best suit you.

Best and Reliable Foldable electric Wheelchair for Adults and Seniors [2022]

How to Remove Water out of a Charging Port? Liquid Detecting Error (iPhone)

Why are gas prices rising?