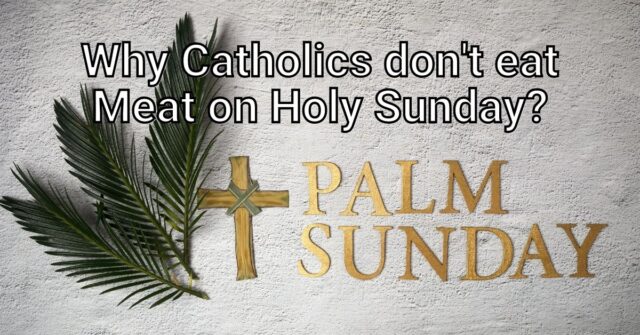 Holy Sunday also known as Palm Sunday or Passion Sunday is a day of huge importance for all Christians. While almost all believers of Christianity abstain from many things on this day, Catholics mostly follow a non-meat dietary practice from the Holy Sunday to the end of the Holy Week.

As it is believed that Jesus entered Jerusalem on this very day, Palm Sunday is celebrated as a commemoration of his arrival. To mark this auspicious history many Catholics often refrain from ingesting meat and related products as a symbol of self-containment. This is mostly because meat is sometimes linked to ‘Satan’ prowess by many religious believers. Thus, abstaining from the same is a test for self-discipline during the Lent and the Holy Week.

However, you will be surprised to know that unlike Ash Wednesday & Good Friday, Christianity doesn’t mandate ‘The Law of Abstinence’ on Holy Sunday. To understand better, let’s have a look at the origin history of this special day.

After getting the premonition of his sacrificial death, Jesus traveled to Jerusalem with his two disciples. But before he entered the city, he asked his two disciples to go to the village of Bethphage and to search for an unbroken colt.

As he approached Bethpage and Bethany at the hill called the Mount of Olives, he sent two of his disciples, saying to them, “Go to the village ahead of you, and as you enter it, you will find a colt tied there, which no one has ever ridden. Untie it and bring it here. If anyone asks you, ‘Why are you untying it?’ say, ‘The Lord needs it.’” (Luke 19:29-31, NIV)

Once the two disciples were back with the young colt, Jesus sat on the animal and made the entrance into Jerusalem. The people welcomed him with great enthusiasm placing palm leaves upon his path and waving at him with palm branches (palm symbolizing goodness and victory), and hence the name ‘Palm Sunday’.

Since then this tradition of using palm leaves and branches to commemorate Jesus’s final journey to the Cross has been celebrated worldwide by Catholics and Protestant communities as well. Although a few many changes have followed through decades, people still celebrate the Holy Sunday, the Sunday before Easter, by reading the account of Christ’s divine entry into Jerusalem, singing traditional hymns, carrying and waving palm branches in grand processions or even by creating small crosses with palm leaves.

What do Catholics eat during Holy Sunday?

Like we discussed previously, there is actually no rule that specifies Christians to abstain from meat on the Holy Sunday. So, it generally depends upon their own beliefs and family traditions.

As the Passion Sunday or Palm Sunday falls on the sixth Sunday of the Lent, many Catholics refer to this time as a self-reflecting and sacrificial phase for their soul, just like Jesus Christ’s sacrifice for humankind. This is when they stay away from manly desires, which can be physical, psychological or even daily life habits.

Similarly when it comes to food, they may refrain from consuming lamb, pork, chicken, beef, deer, ham, and other meats, but again the choice totally depends upon the individual. Moreover the food list is exactly similar to the one that’s followed during Ash Wednesday, Good Friday, and all Fridays that fall when the Lent is continuing, with no extra additions. Thus, if not meat, individuals can still enjoy fish, egg, fruits and vegetables, grains, and more.

What are the other days where the Law of Abstinence is followed?

Generally a long followed tradition, Lent is the only phase where Catholics stay away from meat and related products. To summarize, basically Lent is a festive period of 40 days that marks the events leading to and including the death and resurrection of Jesus Christ. The abstinence is marked as a way of self control and is mostly followed during the Fridays that come during the period.

Apart from that most Christians also choose a vegetarian diet during Ash Wednesday and Good Friday as these two days are termed to be compulsory abstinence days for Catholics, typically. Anyone aging more than 14 years old is mandated to follow the traditions, with pregnant women, the elderly or sick people being exempted from the diet choices.

Can I eat meat on Easter Sunday?

Easter Sunday is THE GRANDEST OF ALL FEASTS for a Christian. However you will be surprised to know that even this excludes any and every animal meat.

This was the day when Jesus Christ resurrected from the Crucifix, and although it may seem as an occasion that calls for celebration, Easter Sunday’s goal is more of remembering the sacrifice of Jesus of Nazareth and seeking modesty and meekness, rather than run behind irrelevant extravagance.

Therefore, it was decided that refraining from consuming meat of any kind was best for individuals, even though fish dishes are usually the highlights of Easter Sundays. Many cultures have even mandated the same, for instance as in Catholicism.

Catholics are known to be sheer determined individuals when it comes to following the very fundamentals of the Christian culture. So, for them everything starting from Lent to all the other auspicious days are ways of abstinence, fasting and even penance for the greater good.
Follow Wntoknow for more interesting updates and releases.

What Should You Do If Your Boat Capsizes? (Memorize This)

What Should You Do to Avoid Colliding with Another Boat?

How to make a Golden Retriever Smile

Why does my Spotify keep Pausing? [2022 Update]