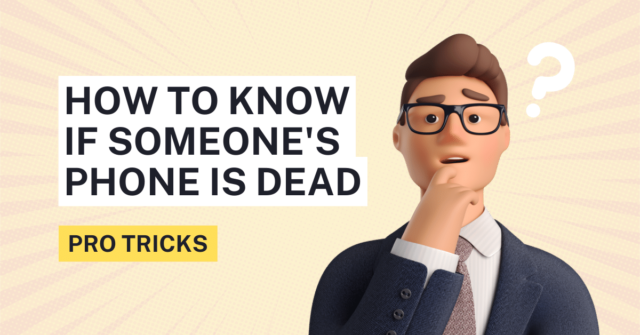 How to know if someone’s phone is dead?

If you are trying to call someone but cannot connect to them, it could mean two things- either the phone is switched off or dead. To know if the person’s phone is dead is to listen to the automated response of the network operator. If you hear, “the phone is unreachable,” or it goes directly to their voicemail after one or half a ring, it means their phone is likely to be switched off.

If the phone is dead because the user changed their number, you will hear a message like “the number is out of service.” If the phone is dead due to going out of juice, you may or may not hear any ring (depending upon the user’s carrier), and it will take directly to the voicemail. Either way, the best way to check whether the person has blocked you or their phone is actually dead is to call them from a different phone number.

Sometimes the answer is not that simple, and you need to have detailed information before coming to a conclusion. It is nearly impossible to differentiate the response you receive from a switched-off or a dead phone. It hugely varies based on the user’s phone type, network carrier, and user preference settings.

Continue reading to understand the basic difference between a dead phone and a switched-off phone. We have listed all the possible causes, scenarios, and solutions for the problem.

When a person’s phone is switched off, it could mean they are busy and don’t want to get disturbed by anyone. It shows that the person is in control of their phone, which means you can try them after some time, and they probably will pick up your call. However, when someone’s phone is dead, it means their battery has gone off or their number has gone out of service for a long time.

Reasons why you cannot call a person?

There are various reasons why your call is not connected to a person:

The phone is switched off

Your call won’t go to a person, or it may go to their answering machine if their phone is switched off. All you can do is leave them a voicemail asking them to call them back or call them after some time. The best option is to call their other number. However, it will only be possible if they use a second phone.

The number is out of service

If you call a person after a gap of months and can’t reach them, it probably means they have changed their number or been blocked by their network provider for not paying the bill. However, it could also mean the person is in an area where they can’t receive the network signal of their carrier.

They have active the “Do not disturb” or “airplane mode”

You cannot call a person when they have activated the “do not disturb” or “airplane” mode in their mode. This means they are busy at the moment and do not want to be disturbed. Try calling them after some time.

They have blocked you

Sometimes it means they have blocked your number. However, you shouldn’t jump to a conclusion right away. Try calling them from another phone number and see if you can get to them.

How to know if someone has blocked you?

A blocked number receives the same response as a dead phone or a switched-off phone. If your number goes to voicemail, it could mean their phone is switched off, but it could also indicate you are blocked.

Similarly, some blocked numbers give you the same response as a dead phone, such as:

“The number is temporarily out of service.”

“The person you are calling is unavailable.”

How to tell if someone’s phone is dead?

Phone ring once and disconnects

You can check a person’s last active status on WhatsApp to know when their phone was ON the last time. If they are a frequent WhatsApp user, you can get a clear idea about their last active time before their phone goes OFF.

Now, a person’s number can be unreachable even though they are active on WhatsApp. This happens when the person is in a place with wifi but doesn’t receive a signal from their carrier. If you see them active on WhatsApp, you could give them a WhatsApp call to confirm.

If a person’s WhatsApp “last active status” is quite long or you couldn’t find them on WhatsApp, it means they have changed their number, or their number is out of service.

Send them a text message

If a person’s number is switched off, the text message you sent will only display as “sent,” not “delivered.” It will be delivered to them once they turn off their phone. This is a great way to know when someone has switched ON their phone. However, it won’t work if their number is off for a longer time. Once the waiting period is timed out, the message will be returned as undelivered..

If you can forward the call

You can forward the call to the person’s other number if they have activated their call forwarding option in case their phone’s dead or turned off. However, not everyone activates this option, especially if they use a corporate number. Before the call is forwarded, you will hear the call ring once and then have the option to forward the call even if their number is off.

You will hear a beeping sound

Also known as the “Not Reachable” tone, the beeping sound is a default sound used by network carriers that signifies the number you are calling is either off or dead. In such cases, you won’t hear any line ringing or have an option to leave a voicemail. Instead, you will get a text message stating that the person is unreachable at the moment, depending on their provider. There are also network providers who will notify you once the person’s mobile is ON.

It might be that the person may be going through some tough times. In such cases, you shouldn’t intrude and respect their privacy. If it’s urgent to get in touch with the person, you should try contacting some friends or family members to know more about their situation.

Mac not connecting to Wi-Fi? Here’s 6 Ways to Fix the Problem

How to get shorter in height?

Is it normal for an eleven year old to like diapers?