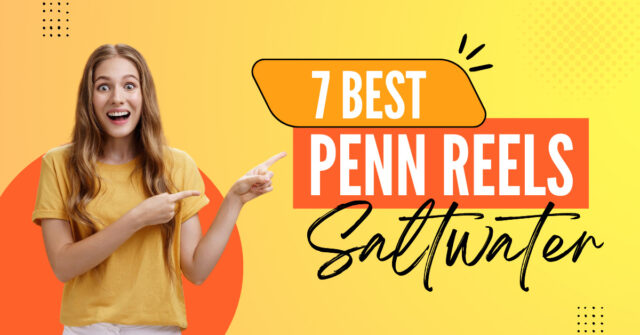 Penn has remained a popular name as an American staple in fishing reels, including saltwater range. Being an owner of Penn spinning reels is an unmatchable and unique experience. Although they often fall under the higher side of the budget, the return is tenfold.

The Penn Battle II spinning reel lasts for years with proper care and is cost-affordable, which an average angler can also afford. It comes with a strong and comfortable rubber knob that does not feel like cheap plastic. The rubber inlay acts as a grip on the braided line to avoid any spillage, especially when you have a lot of line in the water, such as fishing in deep, trolling, etc., or staying on low on line.

The line capacity rings in Battle II indicate the line on the spool, which helps determine the correct amount of lines on the reel. The sealed ball bearings further help prevent saltwater intrusion and give you a smooth drag and retrieve experience.

The Battle II’s drag washers are an upgrade from its predecessor, allowing use from both sides, and providing 20 percent more drag from its previous model. The new painting job has also enhanced incredibly to protect the reel body from salt water and other chemicals causing corrosion.

However, the Penn Battle comes with its fair share of maintenance challenges. Putting everything back together after dissembling can be challenging if you have never worked with an anti-reverse roller bearing..

The Penn Slammer III is a perfect saltwater fishing reel featuring an IPX-sealed system to prevent water from entering the gearbox and drag systems. It has a full-metal body and side plate offering structural rigidity and strength. Another valuable feature is its superior reels’ drag capacity coming from Penn’s flagship dura-drag, materials you will find in international game reels. The slammer 3500 gives an impressive 15kg stopping power. The slammer 10500 with 30kg drag pressure is the best if you want something more significant.

It comes with seven stainless steel bearings with a CNG gear technology system featuring main, pinion, and oscillating brass gears geared for tight tolerances. The 3500 is excellent for targeting big snook, while the 4500 model is ideal for fishing bridges and heavy structures for black drums, snook, and big redfish. Meanwhile, the 5500 and 6500 models proved to be excellent reeling tarpons. Although it may not be a game changer, I liked its oversized handle knob. It offers plenty of leverage while wrestling with powerful fishes.

The Penn Fathom II level wind fishing is a workhorse and can definitely handle excruciatingly wild catches. Its four ultra-smooth bearings and upgraded wind systems offer a poise and elegance that surely justifies its royal status. The fathom II comes with ample spool capacity and a mighty max 30 lbs drag of fishing with its HT-100 carbon fiber drag, making it an ideal fishing reel for bouncing bottom and jigging live baits as well as for trolling sport fishes.

Its complete metal housing design keeps the gears in perfect alignment. Moreover, the fast gear access side plate allows easy maintenance, especially when doing multiple tasks. As it is an overhead reel, you only need to use it with an overhead model rod. If you frequently cast, go for the smaller reel for a faster wind. Meanwhile, the 50LW model is great if you intend to fish deep and hard.

Comprised of machined and anodized aluminum body and sideplates with reel sizes ranging from 12 to 50, the VISX ranges of Penn fishing reels are perfect for trolling and free rod fishing. The dura drag system promotes smoother start-up and eliminates hesitation in extreme drag settings.

The primary and pinion gears are made of stainless steel, which may add a bit of weight to the gear. Its superb corrosion-resistant property and durability make it ideal for saltwater fishing. The versa-strike system further allows you to adjust the drag level on settings. The double-dog ratcheting reels help hold the spool in place and support the drag system by preventing spools from spinning backward.

The inner walls of the reel come integrated with line capacity rings that indicate the remaining yards of line, which is extremely helpful while fishing notorious species like tuna and sailfish when they start peeling off the line. It also notifies you when you need to re-spool when the line drops below the upper ring.

Jigmaster Star Drag by Penn needs no instruction. If fishing runs in your family, there might be one sitting somewhere at the corner of your house. The best thing is Jigmaster Star Drag is its unwillingness to quit. This is why most party boats in North America use this reel as rental equipment. Its loose tolerance allows you to operate it even in significant salty, gritty, and sandy reels, while its rigid 3/0 drive train can overcome hundreds of fish in one go. Maintenance is even more accessible due to its easily detachable side plate that allows you to grease regularly.

The best thing is that this saltwater reel is ready for use right from the box. The first two notable internal components are its drag and gear sleeve. The Jigmasters come with two variants of stock gear sleeves: coarse and fine thread. The stainless gear sleeve is best for you if you plan to fish drag heavier than 15 pounds regularly.

As the smallest in the Squall series of reels, the Squall Lever drag reel is for anglers who want a conventional open round reel that combines the ability to cast baits and lures long distances on lighter-weight lines. It comes with five different models in sizes ranging from 12-40. The 12 and 30 models offer 15lbs of drag, while the 25, 30, and 40 models provide 20 lbs of drag powered by its well-known dura-drag with HT-100 washers.

The body is made from graphite, offering lightweight and corrosion-resistant benefits. In contrast, the stainless steel gears offer a super speed gear ratio, making it perfect for fishing on wrecks for sharks, congers, and cods. The proprietary dura-drag system allows you to hook and catch large species with ease.

Its silent double-dog anti-reverse switch prevents reels from turning backward and allowing the drag to fight the fish. The anti-reverse feature is of significant importance in bottom fishing or when you need to lock down your drag.

The Penn Pursuit IV comes with some massive upgrades from its predecessors featuring durable construction, fabulous cosmetics, and smooth gear system anglers. Like lever drag, the Pursuit IV is also built in an ultra-light corrosion-resistant graphite body, but the side plates are made of metals. However, it doesn’t affect the alignment. The drag system is made of robust HT-100 carbon fiber, ensuring the longevity of the reel, which is extremely important while fishing in saltwater.

Choosing between Penn and Shimano saltwater fishing reels can put you in a tricky spot, as both are leading brands in the fishing industry. If you are in a dilemma to choose between the two, keep reading.

Lets discuss each feature in details:

So, if you want lighter saltwater reels, go for Shimano. Although, some Penn models, like the squall lever drag reel and pursuit IV, are made from graphite, which is lighter than aluminum but not as durable.

Penn is again at the upper hand here with 37 saltwater reels, while Shimano has only 13 varieties of saltwater.

Friction is quite common while using a reel. The primary purpose of ball bearing is to decrease friction and increase reel speed. The reel functions well when the fishing reel has more ball bearings.

The gear ratio determines how faster you can retrieve the line. It means how many times the spool turns when you turn the handle. Penn has more gear ratio, allowing you to recover the line faster.

Catching bigger fish requires a stronger battle, but drag helps you finetune your approach while battling the target. Some fish can pull the line hard enough to overcome the friction. This makes the reel spin backward, letting the line out to prevent it from breaking. Maximum drag is the point where the reels start to spin back. The maximum drag for both Penn and Shimano is similar. However, if you want an exact answer, the Penn Pursuit III might be a little more powerful with its max drag of 9.8lbs while the Shimano Sienna’s max drag is 9lbs.

Durability is something that really matters, as saltwater spinning reels are expensive, and you need a reel that works for years. Now some people complain about the durability of Penn as they feel they are not durable as before. However, no complaints come from Penn’s international range of spinning reels. On average, Shimano reels tend to last longer, but when it comes to saltwater, Penn still wins due to its built-in stainless steel materials.

If you think of the price, Penn saltwater fishing reels are more expensive than Shimano. However, to save money, choosing Penn would be a sound idea. For example, Penn Conflict II and Shimano SLX DC cost the same (around $185), but you get more features in Penn Conflict II. You will get better max drag, materials, ball bearings, and gear ratio in Penn saltwater spinning reels.

Penn vs. Shimano- Which One is better for saltwater fishing?

If you need something light yet powerful, then Shimano is the way to go. However, if you want quality and power to battle big fishes in gritty saltwater, the Penn is the king. Regardless of your choice, your fishing reels’ longevity depends on optimum maintenance and better storage conditions.

Dream of being Shot – What does it mean?