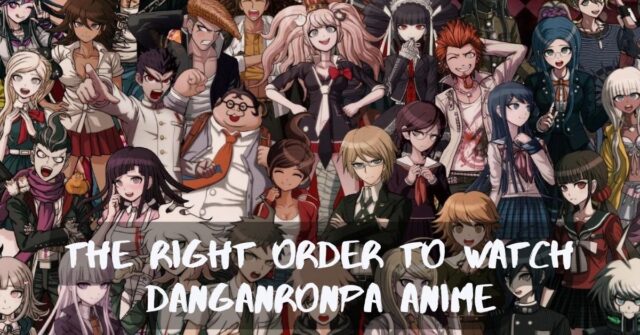 A bop amongst anime lovers, Danganronpa has millions of fans from all around the world. From quirky looking characters to spine-chilling mysterious plots, the series has almost everything that is enough to keep you wide awake during nights.

Why is Danganronpa so popular?

Translated and animated originally from the video game with the same name, the storyline revolves around Hope’s Peak High School. Led by the devilish and sinister Monokuma, a teddy bear with two differently alternate extremes, the game requires the chosen students to find out ‘who murdered who’ and also to look for safe escape options within the given time frame. Combining the very genre of thrilling escape rooms and psychological madness, the game series itself runs for around 20 hours.

But keeping these apart, the most-agreed upon reason behind its popularity is because of the dozens of heroes and villains in the series. And hence unlike any other hero-villain cliche, you can write your own story, every time you play the game with friends. Also thanks to this multifaceted characters, you can never know who is your real friend and who is plotting for your murder during the play.

What happens in Danganronpa?

Well, if you are a beginner and haven’t started yet, you might want to stay away from this part.

So, all Danganronpa manga, series, anime, and video games have 16 primary characters at the start. Each of these students are the ‘Ace’ of their respective fields and are widely popular for their talents. One day they wake up in a rather isolated and weird setting set up by their principal, Monokuma where they have to fight against the tide of time to survive the crisis.

Filled with wild plot twists, every episode or rather story requires the students to find the murderer from amongst them by going through the evidences carefully. A single mistake, and you may not survive the next episode.

The right order to watch the anime is:

If you are up for an exciting anime thriller that is not restricted by any genre boundaries, Danganronpa is what you should watch. However, given its extensive variations into game plays and manga reads, finding the right order to watch the anime might not be as easy as it may seem. Thus, to help you out, here is the correct sequence of the anime series;

Starting with the introduction of all the ‘Ultimate Aces’ of the Hope’s Peak High School, the anime starts in a rather jolly setting, which however, turns into its darkside psychological thriller real soon.

The very school they very happily got into is in reality a trap designed to testify the very boundaries of friendship and trust. They are then given one task, Monokuma, the evil bear, which is to do a murder and get away with it. Once the murderer commits the crime, the aces have to work together or find the perfect solution to act individually and trace the killer. If found, the murderer has to die or else he gets away with his crime to the next episode.

‘Danganronpa: The Animation’ anime has 13 binge-worthy episodes. And while many gamers may complain of it being too plain, the anime successfully catches and displays every individual player’s emotions and fear. And hence the anime series is the best choice for anyone who wants a deep connectivity with the characters they watch.

While it may seem odd to directly jump to the third part of the whole anime series, this is indeed the best way to enjoy the beastly anime. The creators have specially designed the episodes and arcs in such a way that allows the viewers to know more about the player’s past and present. Ranging from the Future, Despair, and Hope Arc, each of these divisions are intricately woven together, letting individuals like us asking for more.

However, to get the most of each of these arcs, it is better to follow an one-by-one sequence for the Future and Despair arcs. For instance, start with episode one of the Future Arc and then shift to episode one of the Despair Arc. This is because while the episodes in the former continue with the sequel to Naegi’s story, the episodes in the Despair arc resonate their past and present lives, connecting them to their present situation. Once done, you can then shift to the Hope arc and continue with the story.

Finally the most sizzling and thrilling of all, the Danganronpa 2 should be in your next watchlist. A setup closely related to the Future and Despair Arc, it is all about finding harmony with true self and even befriending a seemingly mindless foe in a bid to prevent any further misfortunes. Everything that you may have thought to be finally coming into light will once again take you on a crazy-spiralling journey, leaving you questioning even your own judgements.

And no, we won’t be offering any more spoilers here. You can check out the anime or play the Danganronpa video series and find more about this all by yourself.

What is the right order of playing the Danganronpa video games?

Just like the animated series, you will also be required to play the Danganronpa video game in a proper sequence to understand the episodes better.

Similar to its name, the video game is all about the introduction of the main character, Makoto Naeigi, followed by the ‘Ultimate Aces.’ The first season describes all about the journey of Naeigi with the Hope’s Peak Academy and his connection with its deep dark secrets.

Following its predecessor’s thrilling adventures, the Danganronpa 2: Goodbye Despair is the second game of the whole franchise. It mainly revolves around the player’s epilogue, choices, teamwork, and also betrayal stories. Although it was first released for the Playstation Portable in the year 2012, it was later circulated to the foreign market via Playstation Vita in 2013.

The most recent addition to the Danganronpa franchise, the Danganronpa V3: Killing Harmony offers the same vibe as its name. Brimming to its neck with super hard riddles and treacheries from the seemingly ‘good-friend’ it somehow arrives at the ending of the whole trap set out by Monokuma.

This part was written by Kazutaka Kodaka and Takayuki Sugawara, which was later turned into the third part of the video game. The game was released into the main channel market in the year 2017 and since then has been welcomed into many continents all over the world.

So, while there are no wonder thousands of anime and video games you can invest your time in, Danganronpa should however be in your top list. It has got all good and tricky things of all genres and you definitely won’t be disappointed with the play setup and thrilling challenges.

Through this blog we tried covering as much as possible about one of the world’s most beloved anime. So, be sure to follow the order of watch series for the anime or play the game in the exact sequence as mentioned above for a more fun experience. And yes don’t forget to comment down about your views or opinions on this blog.

How to Remove the Tattoo with Laser Surgery

Ranboo Biography: Age, Height, Net Worth And Rest Everything