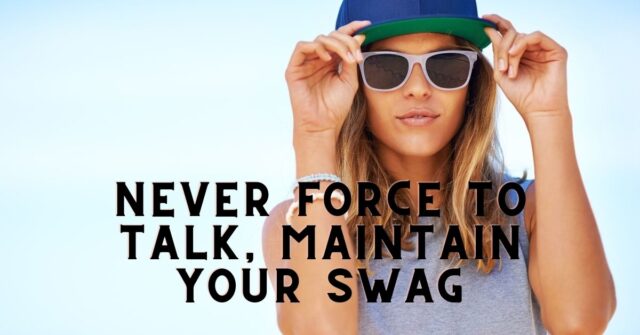 If yes, then there is no need to worry. It is a common phase that happens to many in their lifetime, due to ‘x,y,z’ reasons. The person you are talking to doesn’t feel happy with you, there is nothing to talk about or simply they aren’t interested in you.

While there are many reasons as to why someone is not talking, today we will be looking at why never forcing someone is the best choice. So, let’s start.

Why forcing someone to talk with you is never good?

Forcing someone to talk is never okay. Every human being has a different thought process and variable surroundings in which they live. So, even though you have known each other too long, there may be times when the other party doesn’t want to talk to you, and this is completely okay.

Understanding their situation or simply enjoying your own space is the best outcome of this, as naturally we humans tend to avoid anything that feels hectic and pressurising. This may also create an emotional barrier between you two, causing a rift in your kinship, which is never good.

To understand this notion better, here are the best reasons why you should never force others to talk to you:

It leads to frustration

No matter if it’s a committed relationship or ‘just friends’, to talk or not to talk depends solely upon the person in question. Talking is an action of choice, and hence if the other one doesn’t want to talk, forcing them will definitely make both of you frustrated.

This in turn, may cause the individual to explode when their patience runs out or they may silently choose to never speak to you again, EVER!!!!

It takes too much time

From trying to talk to someone who has chosen silence to thinking about the reason behind their such behaviour, you will be required to invest so much of your valuable time. And as we know time is one of the most valuable assets of an individual’s life that unfortunately waits for none.

So, why waste time for a person that won’t do the same for you. Here, the best resolution will be to walk out of the situation and let the person have some space of their own. Maybe the alone time will help them calm down and reach back to you when they want.

It defies the very basis of a conversation

Conversations are fun. It is a method through which we express our feelings in the form of words, be that for solving a problem or to know more about the other person. However, when we force someone to talk, we are purposefully pressuring them to initiate a chat with us, which rather than aiding in solving the problem, makes it bigger eventually.

A forced conversation is never fun, as none of the participants are not happy when communicating with each other, therefore defying the very motive of talks.

It creates a feeling of resentment

Now imagine, you are in a relationship, where your spouse forces the daylights out of you to do something which you are in no mood of. Will you feel happy or lovely doing that???

The same happens when we force others to talk to us after they have shown clear indications of no interest in doing so. In the end, not only will you start feeling resentful towards them for not acknowledging your efforts, but they also may start hating you for having coerced them too much.

It can cause more bad than good

Each and every human being has a different coping mechanism to stressful moments and hence if your partner suddenly goes all silent in the middle of a fight, it’s better to let them be. By doing so, they are keeping themselves from saying any more hurtful things that they might regret later, and hence provoking them in the wrong way is never good.

In such situations, let them have their space peacefully. You can also choose to go out and get a fresh breath of air, clear your mind, and rethink your faults calmly.

It leads to losing your self-value

While trying to converse with someone doesn’t necessarily mean you are losing your self-worth, doing it uncontrollably and consistently sure makes you lose your value. It is highly crucial for you to know and understand your standing, and thereby act according to them.

Begging someone to talk, reply to your chats or even take you back into their lives is simply described as ‘heights of desperation’ which is never good. Because at the end of your plight, not only you are losing your self-respect but also sabotaging your trust on your own decisions.

How to be the ALPHA?

A wise person once said, “Never beg someone to be in your life. If you text, call, visit and still get ignored, walk away. It’s called ‘SELF-RESPECT’. “

So, the best solution to a situation where you feel as if you are forcing someone to talk to you is to pack your feelings and leave.

See, first of all, you were not born and brought up to entertain everyone’s feelings. YOU AREN’T A PUPPET, SO STOP BEHAVING LIKE THAT!!! Secondly, if the other person is unable to value your efforts even by a tiny bit, then they weren’t meant to be there to be exact. Then, what’s the problem if they stop talking or leave your life for eternity??

Life is short. And hence you should know better than to waste your time, effort and feelings on someone who won’t do the same.

Below are a few pointers that will help you realise your dream of becoming the Alpha, in case you are going through such a situation.

When do you need to ‘force someone to talk to you’?

Similar to every person you meet, not every situation behind someone’s silence may be the same. Someone you know might be going through a hard phase in their lives, needing an attentive ear to desperately vent out their emotions, but may be too shy to demand. Or they might have eventually shut down themselves after facing extreme rejections from others for the same.

If such is the case, and you are cent percent sure of it, then it is definitely okay to force them to talk to you. This is because when a person decides to go silent, it generally means that they have given up almost entirely. They are at one of the most vulnerable spots at that time, and hence forcing your way in may be the only light they need to keep on going. And who knows, by doing so you might end up saving them from jumping to extreme conclusions.
For more interesting discussions like these, follow us on wntoknow.com today and subscribe to our mailing list.

How to Train a German Shepherd Puppy