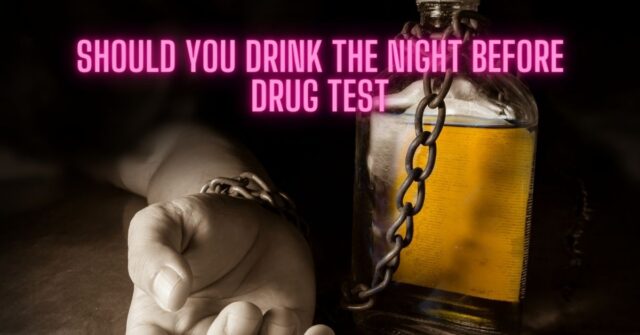 One of the most preferred drinks- Alcohol is definitely everyone’s favourite. However, not every job is lenient towards such practice and hence mandates drug tests before onboarding of new employees.

So, if you are up for a new job or another commitment that needs you to be drug free, it is better to stay away from that tempting golden liquid for a few days.

Alcohol is composed of many complex components. Thus, while some may get dissolved within a few hours, others might stay in the body for a few days. This may come up in your blood or urine sample records, leading to a failure. And therefore it is never advised to drink the night before drug test.

What are the generally followed drug tests?

Depending upon the type of component they are designed to detect, employers may follow any of these six drug test types. They all are variably designed and hence require variable body samples for the test.

The most common of all, blood test is done by taking a blood sample of the individual which is then subjected to further processing in the labs. Such a test allows to efficiently detect the level of alcohol or drugs in the user’s body and is also a very viable option.

A rather yucky way of detecting substance abuse in individuals, mouth swab test is the same as its term. During the process, a clean mouth swab is administered into the individual’s mouth which aids in getting a good amount of saliva without getting them on one’s hands. Same as the blood test, mouth swab test is also used for detecting alcohol and drug levels in a person’s system.

The most full-proof method to tracking one’s alignment with various kinds of drugs, treating a hair under specific laboratory conditions can say a lot about the individual. And no we are not talking about their hair care regime or dandruff prone scalps, but illegal drug-consumption. Performing a hair test can be used for tracking an individual’s 1-2 years record of drug consumption rate. However, it is generally rarely done.

Another form of alcohol and drug testing measure, collecting and then examining an individual’s urine gives a clear view on their substance abuse record. This is one of the most usual ways of drug tests followed by employers and police personnel.

One of the mandatory regulations in many regions includes ‘No drink and drive,’ and hence the next time you find a police man with a weirdly shaped device on their hand, it is mostly a ‘Breathalyser.’ The device’s specific design allows fast and almost accurate readings on the individual’s blood-alcohol level, and is hence a weapon that you need to be aware of after a late-night party.

As the name specifies, sweat test involves capturing and testing a subject’s sweat to find traces of any illegal drugs from their system. The procedure can track almost all drugs and is mostly followed after a thorough blood, and urine test.

Why may I need a drug test?

Generally, a drug test is advised for any of the below mentioned reasons:

If you had too much to drink and arrive at an ER in a sort of delirious state, the tending doctor will give you a drug test just to be extra sure. As their core responsibility is to find out the underlying reason behind their patient’s condition, they might give you a breath or blood test, once you are admitted. This helps them to confirm your blood-alcohol level or drugs suspended in your body, and hence properly care for you.

One of the most concerning reasons, a police officer or concerning authority may ask you for a breath test, if they suspect you of drunk driving. Driving under the influence of alcohol or other drugs is a gravely punishable offence and hence if found guilty, you will end up being dragged to the police station. The same also happens if the police suspects you of being minor and involving in drinking habits or drug abuse.

Sometimes, a court may also direct a concerning authority to inspect an individual’s drug abuse record or alcohol-blood level on certain sensitive cases, such as misbehaviour in public, domestic violence, or custody of children.

Based upon your profession, your employer might also arrange for a sudden drug test to ensure professionalism of their employees. It generally happens, if:

Some industries, such as media and entertainment, sports person, and government workers also have to go through occasional drug tests for their optimal performance.

How to pass a drug test?

Well, the exact answer to this question is by staying perfectly clean. Generally based upon the substance’s composition and dosage, it may take hours or even days to get completely discarded, as previously mentioned above.

To describe it more clearly, here’s a breakdown of how long alcohol and certain drugs stay in our bodies:

Therefore the safest way to pass a drug test is to not use alcohol or other illicit drugs at least for 3 to 4 days prior to the test. You may also try to gulp down a few more glasses of water. The increased liquid intake will automatically lead you to escaping for bathroom breaks more frequently, thereby diluting the urine for a successful result.

Similarly, before a drug test, using an alcohol-based mouthwash is also a big NO. If a mouth swab test or breathalyser is used, it may be mistaken for alcohol consumption.

The best bet to come out of this is to look for the type of drug test beforehand. If you are up for a blood, urine, mouth swab, or breath test, it is better to stay away from alcoholic drinks. Even a tiny bit of alcohol is easy to trace and hence you may end up not getting the job or prove to be guilty, based upon your respective situations.

However, if the test is a hair or sweat test, there are good chances that you can slip unharmed as both the tests are only efficient in tracking drug abuse records from one’s body.

We tried covering everything that was there to know about taking a drug test and if or not one should drink the night before one. If you have any more enquiries, don’t forget to comment down your questions in the ‘Comment section’ below.