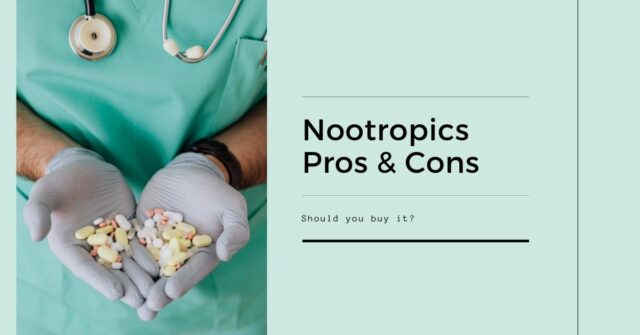 It is a fact that the working population of today is grossly overworked. The need to shine is what keeps the adrenaline surging. Long hours of hard work come at a price. Overwork and overstimulation fatigue the body and the mind, the effects of which are noticed in several ways. In some people, physical and psychological imbalance physically manifests itself, while in some, it leads to fatigue neurotransmitters. The CNS requires an additional stimulant to fight the effects of fatigue and exhaustion while keeping the brain in alert and awake mode. That’s when the role of nootropics becomes imperative.

Nootropics or cognitive enhancers are compounds used to enhance your mental power and accelerate your alertness and focus levels into higher levels. The word Nootropic covers various drugs, from naturally acting to synthetic compounds. Nootropics can be both prescription-based and non-prescription based. Prescription based Nootropics have been medically approved to enhance the cognitive qualities in conditions of narcolepsy, Alzheimer’s disease, and in a few cases of ADHD. Apart from prescription nootropics, some non-prescription ones are made of a combination of natural and chemically acting compounds.

How do they work?

Unlike other cells of the body, the neuron cannot replicate or be replaced. The neuron cells depend greatly on the converted energy of the body for their growth and repair. The extra oxygen provided by the vasodilation increases the energy considerably. This helps in their repair along with improved electrical and neurotransmitter purpose. Natural nootropics, apart from repair and maintenance, stimulate the growth of new neural cells. This, in turn, increases neuroplasticity- the ability of the brain to reorganize itself and compensate for injury and disease with quicker adaptation to changes in the environment. Additionally, it improves memory and thinking abilities.

Help with anxiety and depression

Studies have proved that neurogenesis plays an important role in dealing with depression and anxiety compared to altering the neurotransmitters’ levels. In a study conducted on 24 women with a history of depression in Munich, it was found that hippocampal areas were smaller in these women than in others. Antidepressants take a long time in showing favourable outcomes. Nootropics, especially prescription ones, work on neurotransmitters like dopamine, Gaba, and glutamate alter depression and anxiety levels significantly. But other over-the=counter and natural nootropics like Bacopa Monnieri and Ginkgo Bacopa also work on the BDNF enhancing neurogenesis for fighting the signs.

You need a calm mind with empowered focus and accelerated brainpower to be productive. Nootropics are designed to optimize mental concentration and motivation while reducing stress and anxiety. Nootropics like Modafinil and Armodafinil with a 100-200mg dose produce increased focus for more than 12 hours with enhanced alertness and better working and episodic memory. Additionally, they boast of providing the inability to feel tired to further their benefits. Not just synthetic ones, natural nootropics like Ashwagandha and L-Theanine boost brain calming chemicals by enhancing alpha brain waves that are most active during meditation and sleeping for improved creativity.

While the benefits of nootropics are many, their impacts should also be addressed. Here are some of the problems associated with nootropics

Not regulated by the FDA

The FDA approves a drug on the basis of safety standards and possible side effects. A lot of nootropics have not yet been approved by the FDA but continue to be a part of many Nootropic combinations. In a study conducted by the Harvard Medical School, traces of unapproved compounds were found in more than five brain supplements passed off different names. Another study published in JAMA Network Open in October 2018 nearly 800 over the counter supplements sold between 2007-2016. contained unapproved ingredients. Even more, concerning was that these drugs comprised a $35 billion industry of unregulated ingredients, with the public going crazy for them.

Risk of drug interactions and side effects

Nootropics work on the neurotransmitters and overall CNS system to produce their cognitive enhancement properties. Some triggers are induced by Nootropics getting metabolized by CYP enzymes or accumulating in the bloodstream, leading to side effects. Nausea, vomiting, headache and gastrointestinal problems are common side effects associated with their use. But at times, serious adverse reactions like serotonin toxicity, dizziness, decreased respiratory rates, and even heat stroke can occur. These problems are common in patients with previous systemic conditions who need additional medications along with nootropics. Unregulated, unsupervised use of the products further adds to the problems.

Often there is a lot of misleading information associated with nootropics. There are a lot of claims associated with their use which sadly are far from the truth. The situation has deteriorated to the extent of FDA and FTC warning people about advertising frauds and marketing scams concerning nootropic supplement products. Numerous red flags have been noticed in this regard. Firstly, the surge in its demand has led to a lot of illegal marketing spurious products being passed off as original ones. Secondly, there is a discrepancy regarding their sale in various parts of the world that adds to the problem. The same Nootropic is an over-the-counter legal product in Canada but prescription based in the UK and totally banned in Australia.

Anything that interferes with the brain’s functioning, even for therapeutic purposes, has an addiction potential if used for a prolonged period. Both naturally occurring and synthetic nootropics are good if used in moderation. Even a simple coffee on excessive use can result in sleep apnea and anxiety. It is not easy to get addicted to nootropics. But once you start using them regularly, the body develops a tolerance to them. To overcome that, you need to increase the dose, which causes the risk of addiction. The same dopamine that was beneficial now affects the user’s memory, behaviour, and decision-making skills.

Should you buy it?

Not every person can get addicted to using it or benefit from the same dose as others. There are two ways of understanding whether or not you should go for a Nootropic.

Buy Nootropics online if you’re a healthy person without any systemic conditions and want to boost your mental power. You can also go for a Nootropic if you want more than 5 hours of improved concentration or focus. You are opting for natural nootropics; you can either use them with your meals like coffee, turmeric and blackberries or obtain them over the counter from a reputed and licensed pharmacy. You can opt for nootropics like Modafinil and Armodafinil that have already made a name for themselves in the international nootropic community for more guaranteed results. Conditions like excessive sleepiness owing to narcolepsy and shift work sleep disorder can also be handled through Modafinil, Armodafinil and their generic components. Most importantly, a Nootropic will work best on you if your body accepts the medication without showing any side effects or allergic reactions.

Do not opt for a Nootropic if you are allergic to any of the ingredients mentioned on the cover or in the leaflet provided inside the paper box. Nootropics are not for you if you have a previous history of alcohol or drug addiction, as they increase the risk of relapse to a great extent. Though fewer data are available, Nootropics should be avoided in pregnant or breastfeeding ladies to avoid any chances of damage to the fetus. Additionally, you should be careful in opting for nootropics if you have heart problems, liver problems, psychiatric disorders like depression or mania or a family history of intolerance to the drug.

What is Voluma Filler used for?