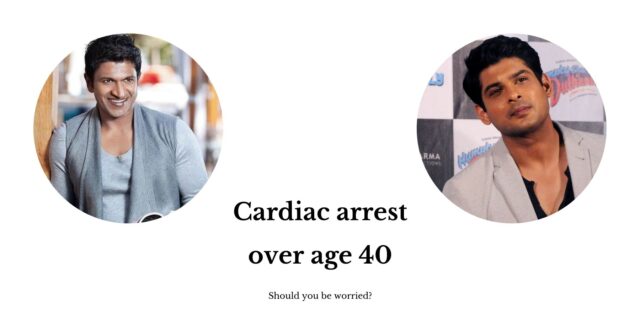 Are you above 40? Are you at a risk of getting a heart attack? Read to find out.

Needless to say, they were alpha males with a strong physical body. Yet, they became victim to cardiac arrest at such a young age.

Now these unfortunate events have led young people (between 35- 50 yrs old) to ponder over few questions.

1. Can Cardiac arrest happen at any age?

2. How do you know if you are prone to cardiac arrest?

3. Why do fit people have heart attacks?

4. How can you prevent cardiac arrest naturally?

In this blog, we are going to address, all of these questions one by one. But before that, let’s have some essential knowledge supplements.

In a study conducted to record the pattern of sudden cardiac death in the younger population, it was noticed that every 1-2 persons in 100,000, become a victim to such untimely death. The median stood at 1.7 cardiac death per 100000 persons of which Asian and African countries had the highest incidence.

There are three major factors responsible for putting a male at a risk for cardiac arrest.

A low testosterone level does not just result in poor sex drive, it also leads to various cardiovascular and metabolic problems.

Stress leads to anxiety and anger they produce more stress hormones inside our body and activate the fight or flight situation. It results in an increased blood pressure and thereby reduced blood flow to the heart.

The damage can be either immediate or a slow build up of cardiac arrest in course of time. Either ways, it proves to be destructive to the arteries.

A research has shown that men stands at a five times higher risk of heart attacks within first two hours of an anger outburst, than other times.

Men with hostile or short tempered personalities are more prone to heart problems than others.

In a study conducted to understand why men are at an increased risk of heart problems, it was found that coping mechanisms play an important role amongst all.

Additionally, men’s behavioral and psychosocial coronary risk factors, like smoking and excessive alcohol consumption, furthur put them at a risk for heart problems at a younger age.

However, these are just the tip of the iceberg. Psychosocial factors are not limited to these two factors but extend to low socioeconomic status, stress at home and work which progress into hostility, anxiety and eventually depression.

Lack of social support with the stigma attached with mental health prevent them from getting the adequate help and treatment required for their condition.

To make matters worse, the presence of more than one of these factors increase the risk of coronary heart diseases in men. The condition, that could be easily avoided with timely precautions, leads to massive cardiac arrest and even death.

How cardiac arrest has become more prevelant in young men?

As per a report in the Times of India, the whole concept of modern urbanisation coupled with stress is responsible for cardiac arrest in young men.

Urbanisation has introduced the stress factor to the younger generation. The stress of staying ahead, coping with adversities, maintaining a rich, etc. have exposed the young generation to unhealthy habits such as smooking, drinking and drugs (in the worst case).

Worst amongst all, it leads to type-2 diabetes.

Are you at a risk of getting a heart attack?

Even if you are a healthy person without any prior cardiac issues, you may develop the risk under certain circumstances.

Heart attack or myocardial infarction occurs due to blockage of your coronary arteries. Over time, cholesterol and fat deposits form plaques inside your arteries and narrow their space.

This plaque during a heart attack ruptures and blocks the blood flow resulting in inability of oxygen to reach the heart and subsequently creates a heart attack.

One of these embolis can travel towards the brain and cause an obstruction in the brain arteries leading to a brain stroke as well.

Eventually, you will have a cardiac arrest where your heart will stop pumping blood altogether leading to a comatose state or death.

High blood pressure, high cholesterol are some of the main factors behind plaque formation. When combined with obesity, these lead to a condition called Metabolic syndrome that puts you twice at the risk of heart problems than others.

Apart from the cholesterol induced plaques, tobacco and illegal drug use create a spasm in the coronary arteries with lung damage that makes you vulnerable to heart problems.

Not to mention, the damage caused by long term exposure to secondhand smoke caused by smoking and hereditary and auto-immune conditions furthur elevate the risk.

It is a harsh but true fact that even if you are very vigilant about your health, if your grandparents, parents or siblings have any history of early heart attacks, you stand at a risk too.

What are the symptoms?

The last one is one of the most commonly noticable traits of cardiac arrest.

This pain gradually spreads to your neck, jaw, back and is triggerred by activity and relieved by rest.

However, the symptoms of heart problems vary from person to person.

You may or may not experience pain or have a sudden episode of cardiac arrest. You may develope warning symptoms with mild to moderate pain hours, days or weeks in advance. The more signs and symptoms you get, the more prompt you must be in seeking an immediate medical help. This can save your life and increase your lifespan in the long run.