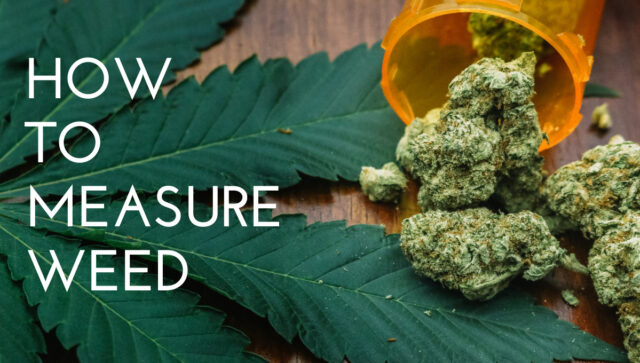 How to measure weed?

Nineteen states in the US have legalized weed for recreational purposes, leading to more dispensaries visits from new and returning customers. As a first-time user, it’s often intimidating to walk inside a store when you have no idea what and how much to purchase. The situation becomes more intimidating when it comes to unfamiliar weed measurement and ensuring you are not being overcharged.

Do you need a gram or an ounce or a quarter? What is a dub? Is an ounce cheaper than a gram?

If you have this kind of question in your mind, then we have the answers for you.

It is the smallest unit of weed one can avail, making it ideal for consumers who smoke occasionally or someone trying on a new strain. The rest of the weed measurements are done of ounces- infractions and full.

One gram of weed also goes by the street name “dime bag.” A single dime bag can fill up 2-3 average size bowls. Since the flower’s shape, size and density may differ, it’s hard to determine a gram just by eyeballing it. It’s better to use a scale for more accuracy. On the other hand, you can shop from a licensed and reputed dispensary as they are less likely to cheat on weight.

An eighth refers to 1/8th of an ounce equals 3.5 grams of weed. It is one of the most preferred quantities of weed for people wanting to keep it at their disposal rather than running to the store repeatedly. You can roll up to three full-gram joints and one half-gram with 3.5 grams of weed. An eighth of weed can provide you with two to three blunts or a large number of spliffs. Besides, you can pack around six bowls or make a batch of potent cannabutter with this weight. If you are an average smoker, consider yourself set for a week or two.

Depending upon your state, location, and dispensary, the standard cost of eighth ranges between $25 to $35. It also goes by half a quarter, eify, slice, and cut.

Quad is the mainstream name for the quarter in the cannabis world, weighting 1/8th of an ounce equals 7 grams approx. The standard price for a quarter can range between $50-$70 depending upon the quality of the weed and the region you are buying from. Some high-quality reserve weeds with higher potency may cost you up to $70. In contrast, mid-shelf or lower-top-shelf cannabis is available at an affordable price.

Half here means half an ounce of weed, weighing 14 grams.

One ounce of weed weighed 28.3 grams technically but rounded up to 28 grams in retail.

With 28 grams of weed, consider yourself packed for a month if you smoke one large joint a day. If you smoke a couple of bowls a week, the stash can go on for several months. Make sure to ask about the expiration date of the flower since you need it to stay fresh for a long time.

A pound of weed equals 16 ounces or 453 grams. It has the highest quantity of weed available for reselling purposes, but only for dealers, dispensaries, and growers.

How to know whether you got the right amount of weed by weight?

There are various ways to determine the weight of your cannabis. You can use a well-calibrated scale to measure weed in grams, for starters. Make sure your budtender at the dispensary weighs the cannabis in clear view. In that way, you will be assured the amount of cannabis they are putting in the container are the exact weight you have asked for.

If your budtender does not use a measuring device, ask them to use one. If they refuse, you may go to another dispensary. Some states sell pre-packaged products, whereas the dispensaries do not use a scale. In such a situation, you can measure its weight at home. Again, make sure to buy a scale that can handle weight in grams.

Another way to measure your way is to use a weed scale smartphone app. While these apps can give you an estimated weight, they are not exactly a source you could rely upon. They might help you for the moment, but definitely not a good option for the long run. Since weeds don’t come cheaper, every milligram you waste could be significantly higher than you could imagine.

One way you should not use to measure is by eyeballing. Not every nug of weed looks or weighs the same. A weed can differ from the other based on several factors such as density, age, and moisture.

What is THC Percentage in weed?

THC (delta-9-tetrahydrocannabinol) refers to the psychoactive elements present in cannabis, while CBD (cannabidiol) denotes the potency of pain-relieving and anxiety-treating properties. THC is measured in percentage, and they usually range between 10 to 30 percentage. If you are a first-timer or resuming after a long gap, start with a low dose of THC. Cannabis in dispensaries often contains more THC than the adulterated version you buy from the street. So, better you ask your budtender to recommend you something great. Once you know how much you can handle, you can plan your next purchase accordingly.

What are Edibles in Cannabis?

Edibles are cannabis-infused food products available in gummies, brownies, cookies, chocolate bars, etc. They are available with THC, CBD, or both as active ingredients. If you like THC, you can go for CBD-only edibles used for anxiety and chronic pain. The other notable benefit is that edibles give you the same effects of smoking marijuana minus putting your respiratory system at risk.

How to measure edibles?

Measuring weed edibles is entirely different than measuring buds. The absorption rate of edibles is much potent and long-lasting than smoking marijuana. Meaning, you will get higher with less weed for a long time.

Instead of grams and ounces, you need to measure edibles in milligrams. Cannabis or weed edibles come as lower as 5 mg THC per serving and go up to 500 mg and higher. For newbies, it’s a good idea to start with a lower dose as the highs may last up to eight hours or more. Therefore, if you eat a strong one, you may have a traumatic experience.

If you eat a strong edible, don’t panic- just put on some relaxing music, have a lot of water, and lay down. The high will only go away as THC levels get reduced from your bloodstream. However, you should seek a medical emergency if you feel hallucinating or a sign of psychosis.

What impacts the cost of marijuana?

Your purchase locations heavily impact the marijuana prices. Besides, the plant grows better in certain environments, which leads to better quality and availability. Other factors affecting the price are local law and tax imposition.

What Factors Can Affect The Price Of Marijuana?

The price of marijuana is impacted heavily by location.

Marijuana grows better in certain environments, a factor that will affect both quality and availability.

Whether marijuana is legal locally will also affect the price of legal and illegal marijuana in that region.

The cost of street marijuana will likely cost higher as sellers take extra risk procuring and selling it. Meanwhile, you can get marijuana at a comparatively cheaper price in states where it is legalized. Besides, marijuana available in legal dispensaries are unadulterated and grown in a better environment.

How much is a dime bag of weed?

A dime bag is a small plastic bag of weed weighing about 1 gram. It is a code for purchasing $10 of weed. The availability of dime bags is becoming rare as most cannabis comes pre-packaged in eights (3.5 grams or 1/8 ounce).

How much is a dub of weed?

Most people use bub sacks and dime bags interchangeably, but they differ in weight according to industry standards.

While a dime bag weighs 1 gram, a dub sack contains 2 grams of marijuana. However, it depends upon the region you are buying from and the state’s tax structure. A dub roughly contains two large nuggets of cannabis ideal for making around five joints.

Dub is also a code term of $20 bag of marijuana, but the actual quantity differs as per the market value of the cannabis in the region. So, you can say a dub of weed is a term used for a $20 bag of kush weighing 2 grams. Meanwhile, in other regions, it may cost you $30 as well.

How much is a quarter of weed?

A quarter of the weed weighs 7 grams. In marijuana dispensaries, a quarter refers to 1/4th of an ounce (not a pound). According to state possession laws, a person can only buy up to one ounce of marijuana. While growers, buyers, and dispensary owners may trade in pounds, you cannot purchase weed a measurement higher than an ounce as a customer.

How much is an ounce of weed?

An ounce contains 28 grams of weed. It also goes by “zip” as it has enough quantity to fill up a ziplock sandwich bag.

The cost of an ounce of weed can range between $160 to $350 depending upon the quality and age of the weed.

How Much Does a Pound of Weed Weigh?

One pound of weed equals 16 ounces or 453 grams. However, consumers cannot possess such large quantities of weed, even in states that legalized weed.

How much does a pound of weed cost?

However, only dealers, cannabis stores, and dispensaries can buy weed in high quantities. Legally, you can only buy cannabis up to 28.5 grams tops.