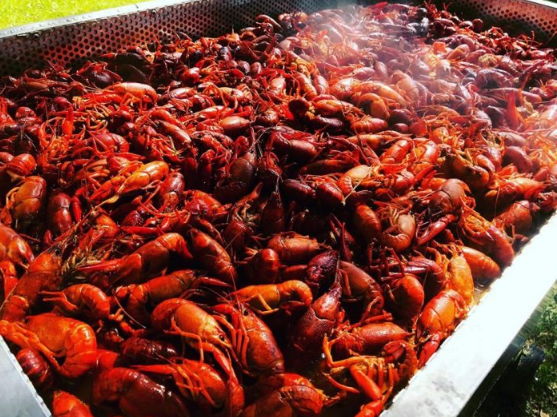 How to properly suck the head of the crawfish in Louisiana style?

For starters, try to suck the head slowly while squeezing the head a little. This will control the flow of the juices. This gives you enough time to enjoy the rich flavor of the crawfish butter mixed perfectly with the spicy juices.

A lot of spices and seasoning goes in Louisiana style cooking. Crawfish are boiled with Cajun seasonings like paprika, cayenne pepper, onion powder, thyme, oregano, and many more. When boiled at the perfect temperature, those spices get soaked inside the head of the crawfish, giving you that intense and spiciness as you devour them.

The spicy aroma itself will tempt you to suck off the whole head at one go, especially if you eating it the first time. Avoid doing that or you will get spices flying in your nose and mouth, which will leave you in cough and tears.

How to eat the tail of the crawfish in Louisiana style?

Most of the meat in a crawfish is concentrated on its tail. You can break the shell by squeezing the tail with your thumb and forefinger. Make sure to put the forefinger by the sides of the tail where the head meets the tail. Giving it a gentle squeeze can do the trick and break the shell in half. Peel the shell from the bottom with your finger or by teeth.

Should you eat the claws of the crawfish?

Yes, the claws of the crawfish are completely edible. However, most people discard it as the chances of getting good chunks of meat are quite rare. If the crawfish you pick has bigger claws, then you might get lucky.

Is it healthy to eat crawfish head?

You don’t eat the head as a whole, rather suck on the juices inside the head. To answer the question, Yes, the yellow stuff inside the crawfish’s head is safe, healthy, and loaded with flavors. If you are throwing out the heads, then you are missing out on the good stuff.

Now the idea of sucking the brain of a sea creature can be off-putting for many. However, crawfish don’t have a brain. At least, not as similar to mammals. They don’t have a central nervous system. The antennae and legs of the crawfish work as a series of receptor cells. It didn’t help them produce complex thoughts as humans, but help them to avoid nearby predators.

Now if you peek inside the head of a crawfish, you will find a big blob of fat. This is called hepatopancreas, which works as similar to a liver. In terms of flavor, the crawfish butter comes close to the taste of foie gras, but its earthy and salty taste makes it even better and succulent.

Can you eat crawfish with straight tails?

You can safely eat a crawfish with a straight tail, but avoid it if the meat is mushy or crumbly.

It is an old myth that forbids people to eat crawfish with straight tails.

However, the LSU College of Agriculture debunked that myth. According to the research, dead crawfish when refrigerated for 5 days can also curls while cooking. The research shows that the straight tail can be a result of putting too many crawfish in the pot.

Which Zodiac Sign is the Meanest? Nicest to Meanest Ranked